In this notebook, we will walk through the most basic functionalities of SmartSim.

Experiments are how users define workflows in SmartSim. The Experiment is used to create Model instances which represent applications, scripts, or generally a program. An experiment can start and stop a Model and monitor execution.

The next step is to initialize an Experiment instance. The Experiment must be provided a name. This name can be any string, but it is best practice to give it a meaningful name as a broad title for what types of models the experiment will be supervising. For our purposes, our Experiment will be named "getting-started".

If launcher="auto" is used, the experiment will attempt to find a launcher on the system, and use the first one it encounters. If a launcher cannot be found or no launcher parameter is provided, the default value of launcher="local" will be used.

For simplicity, we will start on a single host and only launch single-host jobs, and as such will set the launcher argument to "local"

To run a workload through SmartSim, a Model instance must be created, and started.

Experiment.create_run_settings is used to create a RunSettings instance for our Model. RunSettings describe how a Model should be executed provided the system and available computational resources.

create_run_settings is a factory method that will instantiate a RunSettings object of the appropriate type based on the run_command argument (i.e. mpirun, aprun, srun, etc). The default argument of auto will attempt to choose a run_command based on the available system software and the launcher specified in the experiment. If run_command=None is provided, the command will be launched without one.

Once the Model has been created by the Experiment, it can be started.

By setting summary=True, we can see a summary of the experiment printed before it is launched. The summary will stay for 10 seconds, and it is useful as a last check. If we set summary=False, then the experiment would be launched immediately.

We also explicitly set block=True (even though it is the default), so that Experiment.start waits until the last Model has finished before returning: it will act like a job monitor, letting us know if processes run, complete, or fail.

The model has completed. Let’s look at the content of the current working directory. We can see that two files, tutorial-model.out and tutorial-model.err have been created.

Now let’s run two different Model instances at the same time. This is just as easy as running one Model, and takes the same steps. This time, we will skip the summary.

For users of parallel applications, launch binaries (run commands) can also be specified in RunSettings. For example, if mpirun is installed on the system, we can run a model through it, by specifying it as run_command in create_run_settings.

Please note that to run this you need to have OpenMPI installed.

This time, since we asked mpirun to run two tasks by calling openmpi_settings.set_tasks(2), in the output file we should find the line hello world! twice.

In the previous example, the two Model instances were created separately. The Ensemble SmartSim object is a more convenient way of setting up multiple models, potentially with different configurations. Ensembles are groups of Model instances that can be treated as a single reference. We start by specifying RunSettings similar to how we did with our Models.

Then, instead of creating a single model like we did in previously, we will call the Experiment.create_ensemble method to create an Ensemble. Let’s assume we want to run the same experiment four times in parallel. We will then pass the method the same arguemnts that we might pass Experiment.create_model in addition to the replicas=4 argument. Finally, we simply start the Ensemble the same way we wold start a Model.

Now let’s imagine that we don’t want to run the same model four times, but we want to run variations of it. One way of doing this would be to define four models, and starting them through the Experiment.

For a few, simple Models, this would be OK, but what if we needed to run a large number of models, which only differ for some parameter? Defining and adding each one separately would be tedious. For such cases, we will rely on a parameterized Ensemble of models.

Say we had a python file output_my_parameter.py with this contents:

Our goal is to run

with multiple parameter values substituted where the text contains ;tutorial_name; and ;tutorial_parameter;. Clearly, we could pass the parameters as arguments, but in some cases, this could not be possible (e.g. if the parameters were stored in a file or the executable would not accept them from the command line).

First thing first, is that we must again create our run settings:

Then, we define the parameters we are going to set and values for those parameters in a dictionary. In this example, we are setting:

In the original file output_my_parameter.py, which acts as a template, they occur as ;tutorial_name; and ;tutorial_parameter;. The semi-colons are used to perform a regexp substitution with the desired values. The semi-colon in this case, is called a tag and can be changed.

We pass the parameter ditionary to Experiment.create_ensemble, along with the argument perm_strategy="all_perm". This argument means that we want all possible permutations of the given parameters, which are stored in the argument params. We have two options for both parameters, thus our ensemble will run 4 instances of the same Experiment, just using a different copy of output_my_parameter.py created by calling Experiment.generate(). We attach the template file to the Ensemble instance, generate the augmented python files, and run the experiment.

We can see from the output that four instances of our experiment were run, each one named like the Experiment, with a numeric suffix at the end: ensemble_0, ensemble_1, etc. The call to Experiment.generate() created isolated output directories for each created Model in the ensemble and each ensemble member generated its own output files, which was stored in its respective directory.

That’s it! All possible permutations of the input parameters were used to execute the experiment! Sometimes, the parameter space can be too large to be explored exhaustively. In that case, we can use a different permutation strategy, i.e. random. For example, if we want to only use two possible random combinations of our parameter space, we can run the following code, where we specify n_models=2 and perm_strategy="random".

Another possible permutation strategy is stepped, but it is also possible to pass a function, which will need to generate combinations of parameters starting from the dictionary. Please refer to the documentation to learn more about this.

It is also possible to use different delimiters for the parameter regexp. For example, if we had simmlarly parameterized file named output_my_parameter_new_tag.py, with contents:

We would want to use @, instead of ;, as our tag. We can trivially make this adaptation by passing a tag argument to our Experiment.generate call.

Last, we can see all the kernels we have executed by calling Experiment.summary()

The Orchestrator is an in-memory database (Redis/KeyDB) that is launched prior to all other entities within an Experiment. The Orchestrator can be used to store and retrieve data across languages (Fortran, C, C++, Python) during the course of an experiment and across multiple workloads. In order to stream data into or receive data from the Orchestrator, one of the SmartSim clients (SmartRedis) has to be used within your workload. 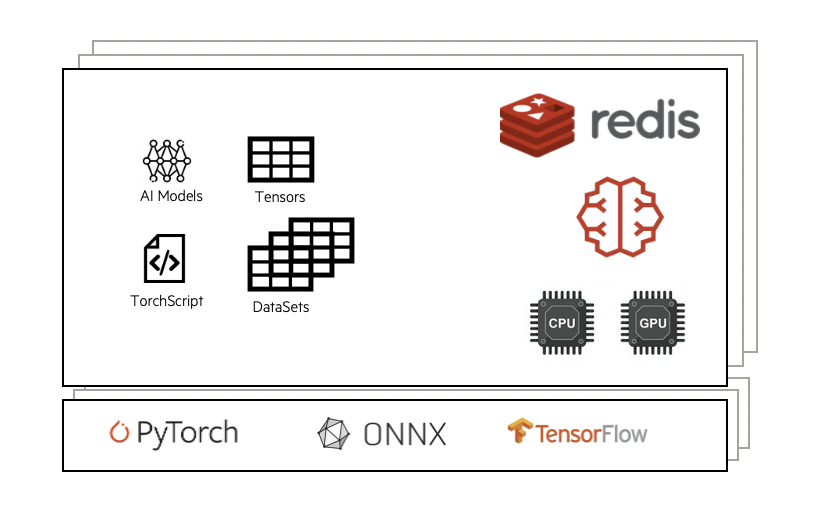 Orchestrators can either be deployed on a single host, or many hosts as shown in the diagram below. 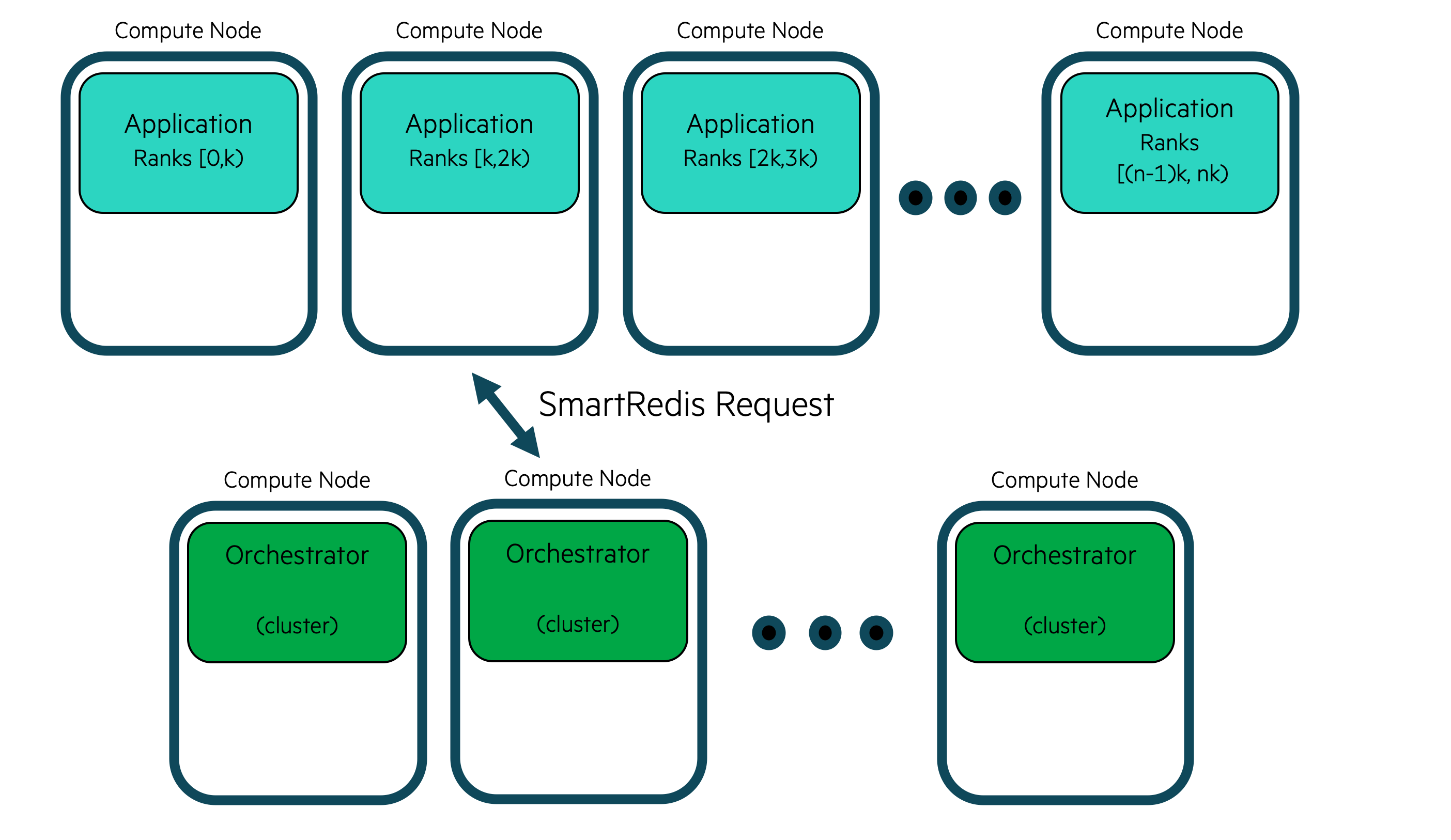 In this tutorial, a single-host host Orchestrator is deployed locally (as we specified local for the Experiment launcher) and used to demonstrate how to use the SmartRedis Python client within a workload.

Now that the Orchestrator is running, a SmartRedis client can be used to store and retrieve data from the database.

Then, we can use the client to put and retrieve Tensors. Tensors are the native array format of the client language being used. For example, in Python, NumPy arrays are the Tensor format for SmartRedis. Each stored tensors needs a unique key at which to be stored.

For more information on ML inference in SmartSim, see the inference tutorial.

Now we send the model to the database, again, we assign it a unique key, tutorial-cnn. This key is provided to run the model in the Client.run_model method.

Notice that we could have defined the model as an object (without storing it on disk) and send it to the DB using set_model instead of set_model_from_file. We can do the same thing for any Python function. For example, let’s define a simple function takes a NumPy tensor as input.

Now let’s store this function so it can be called, assigning it the key max-of-tensor:

And, as expected, we obtain the same result we obtained when we ran the function locally. To clean up, we need to tear down the DB. We do this by stopping the Orchestrator.

In Section 1.2 we used Ensembles. What would happen if Models which are part of an Ensemble tried to put their tensors on the DB using SmartRedis? Unless we used unique keys across the running programs, several tensors (or objects) would have the same key, and this key collision would result in unexpected behavior. In other words, if in the source code of one program, a tensor with key tensor1 was put on the DB, then each replica of the program would put a tensor with the key tensor1. SmartSim and SmartRedis can avoid key collision by prepending program-unique prefixes to Model workloads launched through SmartSim.

Instead of creating a new Experiment for this section, we will use the previous Experiment and relaunch the Orchestrator using the db reference that is already defined.

Now let’s add two replicas of the same Model. Basically, it is a simple producer, which puts a tensor on the DB. The code for it is in producer.py.

We add a consumer, which will just retrieve the tensors put by the two producers and check that they are what it expects.

We need to register incoming entities, i.e. entities for which the prefix will have to be known by other entities. When we will start the Experiment, environment variables will be set to let all entities know which incoming entities are present.

Finally, we attach the files to the experiments, generate them, and run!

The producers produced random NumPy tensors, and we can see that the consumer was able to retrieve both of them from the DB, by looking at its output.

As usual, let’s shutdown the DB, by stopping the Orchestrator.